We take this moment to bow our heads in silence as Madonna and MIA, put the proverbial nail in the coffin of why the Superbowl now sucks., at from the halftime show perspective. Now for years I’ve always said its getting worse, and that they keep booking over the hill entertainers for the show. Ask yourself this would you rather see, Mick Jaggers old ass try and grind it out to your mom and grandma, or Lady Gaga or Drake, bring the stadium down.

Now as far as this years entertainer, Madonna, I didn’t have high expectations. The simple fact is she in her 50’s and she may sing “Like A Virgin” but sure the hell can’t move like one anymore.  Now it does appear that she kinda had the same sentiment that I share in regards to the entertainment by including LMAFO, Cee Lo Green, Nikki Minaj and MIA. Unfortunately I don’t think its was enough. 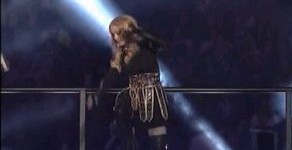 Needless to say, hoping around a stage in stiletto is not conducive to a celebrity volunteering for the next great leap in hip replacement technology.  I’d like to think she did have the foresight to know she may not be able to still perform at the same level as a younger self, and thus employed the assistance of a few others.

From a musical perspective I think the best portion of the performance was the “Music/Party Rocker” collaboration.  once the decks are  back up and running I will likely make that mix part of the 1st monthly podcast, its a great example of old meets new and how some aspects of music never change and are ever evolving. 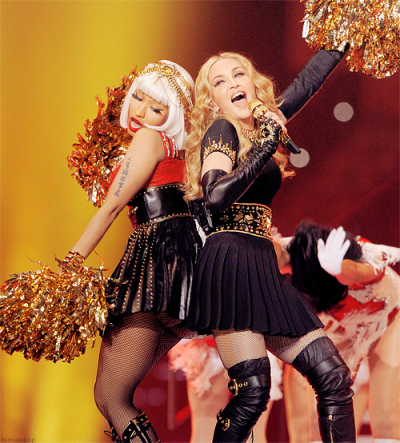 Next up we had Nikki Minaj and MIA, both of whom did they’re part to boost the slowly waning performance, kinda like a shot 5hr energy drink to a mid day slump.

Followed by the now controversial MIA, but really was what she did that controversial. Compared to the Fiat and Telflora commercials it didn’t register on the scale of offensiveness.

The finale at least ended somewhat on a higher note that the middle, with Cee Lo green leading a marching band to the stage performing “Express Yourself” and and then remixing over to “Like a Prayer” with full gospel choir.

Bottom line is this I would have rather watched a montage of the best Superbowl commercials from the last 20 years than watch the performance of a once great pop cultural phenom lip synced medley.

As for the commercials…everyone tried to be funny, some managed, some didn’t.

Ferris Bueller’s Day Off is one of my favorite funny movies of all time, but Broderick should have done that commercial maybe 5yrs ago.

Clint Eastwood’s was very moving , especially when followed by the trailer for Act Of  Valor.

Alot of people like the M&M commercial, I thought it was kind of weak.

The funniest IMHO was the Doritos Sling Baby